45 Minutes
Customs is a raid in the center of Tarkov that is adjacent to Woods, Reserve and Shoreline access is via roads or train tracks. It is the second ever released raid after Factory that is located between Customs and Woods, during the development it was gradually expanded and further EXFIL's added. Customs is also home to the Scav Boss Reshala that can sometimes be found at the dormitory, the gas station or in a warehouse.

"A large area of industrial park land situated adjacent to the factory. This area houses a customs terminal, fuel storage facilities, offices, and dorms as well as a variety of other infrastructure buildings."

Reshala resides at one of three different locations, at the dormitory building complex, at the gas-station or the warehouse at the northern end. He is accompanied by four bodyguards that are equipped with a variety of level 2 to 5 armor and assault rifles or assault carbines.

Add a photo to this gallery 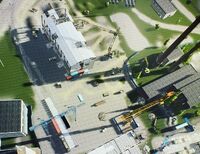 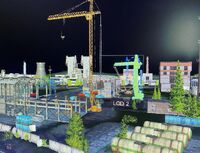 Upcoming expanion with Patch 0.12.6.x
Add a photo to this gallery

Customs EXFIL - ZB 013
Add a photo to this gallery

Retrieved from "https://escape-from-tarkov-archive.fandom.com/wiki/Customs?oldid=38403"
Community content is available under CC-BY-SA unless otherwise noted.